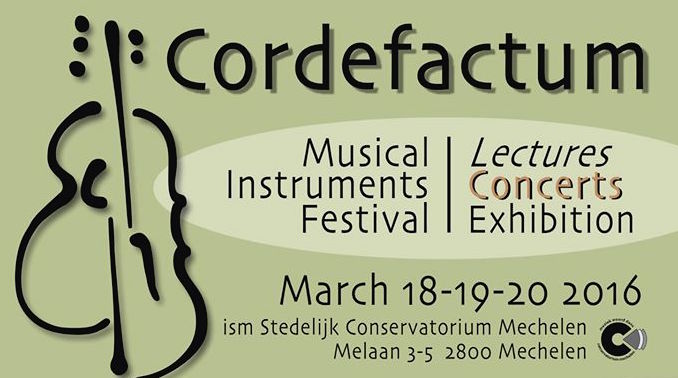 I was honoured to be asked to deliver two lectures at Cordefactum 2016, a festival of instrument making organised every two years by the Centrum voor Muziekinstrumentembouw. It was held at the Stedelijke Conservatorium in Mechelen in Belgium over the weekend of 18th – 20th March. Mechelen is a beautiful city with an illustrious past – it was a regional capital in the early 16th century and has many beautiful historical buildings, including the palace of Margaret of Austria, daughter of Holy Roman Emperor Maximilian I. You can’t go to Belgium without sampling the beer, and in the case of Mechelen the Het Anker brewery produces a nectar called Gouden Carolus, presumably named after the Emperor Charles V, who is said to have been an enthusiastic patron. Just make sure you look at the label on the bottle – these beers can be up to 11% alcohol!

Both lectures were delivered to a large audience of instrument makers and students who learn to make lutes, viols, guitars and members of the violin family in the school. Apart from the lectures, there was a large exhibition in the cultural centre which occupies the same building as the conservatory, the Stedelijke Conservatorium. The exhibition space was huge – originally a church and now used as a concert hall – but it was still a challenge to cram everything in, with lutes, viols, harpsichords and a large number of violins, violas and cellos. There was even an impromptu string quartet which sampled many of the instruments on display. There was a concert each evening – the first evening White Sparrow (Debi Wong and Solmund Nystabakk) gave the best concert of lute songs I have ever heard.

Of course when you get a bunch of instrument makers together in one place they talk (work)shop, and I was really pleased to find so many points of overlap with my fellow lecturers Malcolm Rose, Shem Mackey, Thomas Munck and Andreas Kilström. Their depth of experience was amazing, as was their enthusiasm for exploring new ideas and constantly rethinking their practice. As with all interdisciplinary conferences, the discovery of shared problems and solutions was a thought-provoking process which I found inspiring. Special thanks must go to Dirk de Hertogh, who teaches lutemaking at the school, for inviting me and for making everything run so smoothly.